Kite Ayiti Viv! And how.

6 years ago, last week, I stood in this building. 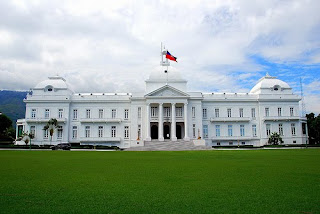 As of Tuesday evening, it is no longer standing. 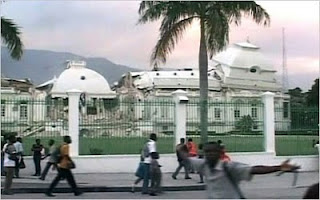 Haiti's capital city, Port au Prince, suffered a 7.0 magnitude earthquake on Tuesday evening, just before 5:00PM EST. Over thirteen additional aftershocks, many registering at 5.0 on the Richter scale, followed. Buildings more than one story tall, already dilapidated as a result of Haiti's poor infrastructure, shook to their cores and collapsed. Over 100,000 are estimated dead and many more are wounded or trapped, with little hope for adequate medical attention or rescue. The National Penitentiary collapsed, allowing inmates to escape, and prompting worries about looting by escapees. Simply put, there's no electricity, there's no water, and Haiti is a state of emergency and chaos.

While disaster relief organizations and rescue workers take to the triage effort over the next few days, the best things for rest of us to do are to donate money for relief, to learn more about Haiti's compelling history, and to consider opportunities for not only restoring, but improving the quality of life for those living in the poorest country in the Western Hemisphere.

* Text "YELE" to 501501 to donate $5 through YELE.org, Wyclef Jean's organization
* Donate to Partners in Health/Zanmi Lasante, which has long worked on the island with the philosophy that health is a human right. "As a result of this calamity, Partners in Health probably just became the largest health care provider still standing in all Haiti."

2. LEARN ABOUT THE PEARL OF THE ANTILLES

* On 1 January 1804, Haiti became a free republic. Haiti was the first independent nation in Latin America, the first post-colonial independent black-led nation in the world, and the only nation whose independence was gained as part of a successful slave rebellion.

* The Haitian Revolution stood as a model for achieving emancipation for slaves in the United States who attempted to mimic Toussaint L'Ouverture's actions.

* In 2004, Haiti celebrated the bicentennial of its independence from France.

* The US has suspended deportation of Haitians but US Senator Kristen Gillibrand (D-NY) and TransAfrica Forum issue a further call to place into effect Temporary Protected Status.

* Jubilee USA has called for the cancellation of the remainder of Haiti's international debt. 60% of Haiti's debt was cancelled under the World Bank and International Monetary Fund's Heavily Indebted Poor Countries (HIPC) initiative in June 2009. However, that correcting this injustice took so long, when a substantial portion of the nation's debt had clearly accrued under the despotic administration of the Duvaliers, is little cause to celebrate. The annual debt service payments amounted to 35% of Haitian GDP and short-changed its citizens of the ability to invest in infrastructure, health, education, and more. It is worth asking how much more Tuesday's earthquake was exacerbated by Haiti's odious and illegitimate debt.

* Call your US Senators and Representatives to urge their support for President Obama's call for a "swift, coordinated, and aggressive response," to the crisis in Haiti. Massive assistance for relief and reconstruction should come in the form of grants, not loans. Search Congress.org's online directory or call the U.S. Capitol Switchboard at (202)224-3121 and ask for your senators' and/or representative's office.

Piti piti na rive. (Haitian Creole for “little by little we will arrive.”)
Posted by Anonymous at 1:33 AM
Email ThisBlogThis!Share to TwitterShare to FacebookShare to Pinterest