"The Death of Haitian Democracy"

Tonight, a number of colleagues and fellow activists with whom I'd visited Haiti in January 2004, following its Bicentennial Celebration, reconnected over the phone. We caught up with each other, shared personal news and media reports about the current conditions in Port au Prince, but most importantly, reflected on the memories of our days shared together on the island. That time, spent amongst Haitians concerned about the survival and development of their nation, was what truly made us love Haiti and to care to this day for its health. I'm posting an old news article highlighting my brief time in Haiti and a short documentary video I made a few short months after, following the forced-removal of democratically-elected President Jean Bertrand Aristide from power and from the country. Kite Ayiti Viv! 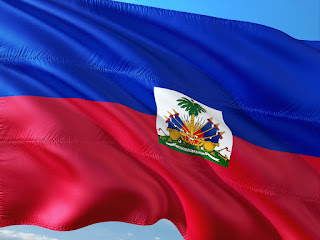 Local Woman investigates U.S. aid embargo in Haiti Diane Tran studied the effects of U.S. policy in Haiti Posted: 2/27/04 by Abigail Mackenzie Thisweek Newspapers Bullets were flying nearby at a violent protest when 19-year-old Diane Tran and 12 other American students arrived at the U.S. Embassy in Port-au-Prince, Haiti. The students, in Haiti during January as part of a Global Justice campaign, were on their way to the embassy for a meeting. When the van they were riding in arrived outside of the embassy, the students scrambled to get inside and away from the violence. All the U.S. students were let in, Tran said, but the embassy security guard did not allow their driver to enter because he was Haitian. The students felt torn between going inside for safety and staying with their driver, Tran said, because they had become close friends with him during their trip. The students ultimately chose the safety of the embassy, but Tran said she feels that this experience reflects the overall current relationship between the U.S. government and Haiti. The U.S. government is denying Haitian people aid in a time of extreme need, Tran said. While the country is embroiled in rebellion, the U.S. government continues to enforce their aid embargo in Haiti. Haiti has the highest mortality rate in the northern hemisphere and their AIDS infection rate has reached 6 percent. In the United States the AIDS infection rate is 0.6 percent. Also 80 percent of Haiti's population lives below the poverty line compared to 12.7 percent in the United States. Haiti may seem like a long way from Dakota County, where Tran grew up and lives with her parents Xia Tran and Khen Ma in Lakeville, but her experiences in Rosemount and Lakeville led her to where she is today. Tran got her first taste of leadership at Rosemount Middle School as a member of their student council. After her time on the student council, Tran said, she realized that if she could be a leader in her school, she could also be a leader in her community. At Rosemount High School, Tran said she participated "in a ridiculous amount of activities. She was also very active in the community. One of Tran's positions was on the Dakota County Youth Planning Committee, an organization dedicated to promoting healthy lifestyles and options for youth. As co-chair Tran said she tried her best to demonstrate to other youth how they could create healthier lifestyles. Tran said she thought it was especially important to give other young people tangible ways to make improvements in their lives and communities instead of just sitting around and talking about it in a meeting. Tran would carry this philosophy with her on her trip to Haiti. Tran also became involved with Target Market, helping to found the youth anti-smoking campaign. In her work with Target Market, Tran said she was able to get out and talk to a lot of youths in the community, something she likes to do. After graduating from Rosemount in 2002. Tran began attending the College of St. Scholastica in Duluth. At St. Scholastica, Tran is working on designing her own major that will probably include political science, philosophy, and Latin American studies. While Tran was at school, a friend from Target Market told her about Global Justice. According to its Web site, Global Justice "seeks to mobilize a movement of students and young people in the United States in partnership with youth internationally to promote global justice and responsibility through transformative education, leadership development, informed advocacy and better public relations. Global Justice currently is pursuing two different campaigns, the Student Global AIDS Campaign and the Student Campaign for Child Survival. Both of these campaigns were relevant when Global Justice traveled to Haiti in January. Haiti has been in political turmoil for decades. In 2001 the United States began an aid embargo on the country because of a disputed election. Since then, the United States does not think the Haitian government is stable enough to receive funds, Tran said. The group traveled to Haiti to experience what life was like and to build relationships that would help them with their campaigns. During their trip, Tran and the group talked with Haitian citizens, visited clinics, and attended many meetings. Since returning from their trip, Tran and the other students have tried to increase awareness about the poverty and AIDS situation in Haiti.Ý So far, Tran said she has done this by sharing her stories with her friends and family and holding a teach-in at St. Scholastica about the subject.

The Death of Haitian Democracy from Diane Tran on Vimeo.

Posted by Anonymous at 10:15 PM
Email ThisBlogThis!Share to TwitterShare to FacebookShare to Pinterest