Report Roll: What Does the Next Generation of American Leaders Think?

Thanks to Katie Eukel for the heads up about the February 2011 Brookings Institution report entitled, "D.C.'s New Guard: What Does the Next Generation of American Leaders Think?"(PDF) The study contends that as Millennials come of age, entering and advancing in the workforce and the electorate, they will have a political, economic, and social impact not seen since the mark the Baby Boomers have left on American and global politics beginning in the 1960s. 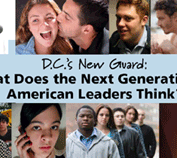 Given the unique selection of those surveyed, the report may well align with how those engaged with Minnesota Rising might respond. The summary states, "The following study is significant for what it is, but also should be judged by what it is not. It is a look at a subset of young leaders’ identities and attitudes. It is not a survey of overall youth or general population attitudes, but rather only a set of youngsters who have been judged by their peers as having leadership qualities and have already demonstrated an interest in the world of policy and politics. To put it another way, it’s a survey of the type of kids who run for student government and choose to spend their summer vacations working in Washington." The researchers acknowledge that their pool of respondents is composed of young people who have already evidenced leadership skills and an interest in politics and policy.
Those active in Minnesota Rising and emerging leader organizations in Minnesota have similarly elected to take on civic leadership roles, whether that interest developed at an early age through involvement with Girl Scouts or a religious institution or has come to light more recently given a college club or workplace giving program. Some have described Minnesota Rising as a network of movers and shakers, already self-identified and actively making a difference for our communities and state. So, I'd urge you to take a look through their findings and fascinating infographics - do they resonate with you, how you consume media, what you think of The Daily Show, or what you believe? There's been a lot made of this generation in politics and the media; I'm more curious what Minnesota's new guard and what our next generation of leaders make of it.
Posted by Diane Tran at 7:21 AM
Email ThisBlogThis!Share to TwitterShare to FacebookShare to Pinterest