I led a Community-Building 101 breakout session after speaking to attendees of Minnesota Campus Compact's Citizen-Scholar Leadership Summit last week. Through a variety of activities, thoughtful questions, and engaging dialogue, we uncovered a number of strategies for building community amongst students, coworkers, and the larger community. Session attendees talked about having a standard space or time in which to reflect on successes or air grievances, the importance of good communication lines and trust, and above all, making sure people have fun together in community. To make sure we're having fun as we talk about community-building, I wanted to share a few other places, perhaps unconventional, where I find a sense of community. What about you? Do you have strategies or zany places you build community? Please share in the comments and we can do a bit of community-building on this blog! Blackjack At a Blackjack table, a community quickly forms amongst strangers. For newbies that step up to try their hand, veterans are generally more forgiving. They offer suggestions when new players frown in worry and cheer for them when they receive an unexpected Blackjack. Regulars must do their best to study up and learn the basic rules of Blackjack in order to pay due respect to their tablemates. Nothing feels worse than when an unsure player hits on a 16 against a dealer's low card and takes what would inevitably be the bust card for the dealer, rendering any other generally safe hands losses. The unnecessary hit on a 16 when the dealer showed a bust card (one of the basic rules for Blackjack etiquette) earns her the scorn of those around the table. Though at face value this disappointment arises in response to the loss of money wagered, the contempt others feel can run a bit deeper. Worrying about one's hand is warranted, however, the player must recognize that she is, along with her tablemates, playing against the dealer. As such, her actions must work to ensure her victory as well as to take into account the effect of her decisions on the other players. When viewed in this way, the disdain expressed by the other players arrives as a result of the the player not doing what she knew to be right and thus failing herself and the team. In Blackjack, as in many other places, a single player's actions are bound up in the destiny of the other players at the table. Once our player realizes that, she will be careful to take good care and great pains to trust the rules as well as her intuition about how the others will be affected. Community I adore the new NBC comedy, "Community." This show is ingeniously clever, leaving me to replay scenes and jokes in my mind for days after viewing. Its witty writing, deadpan acting, and inventiveness make it well worth the watch. Better yet, though, this show has got heart. I have been brought to tears by the characters and their situations. I laugh at the quirky friendships and alliances formed on the show and hope so much for the characters' well-being and happiness. While becoming friends with television characters isn't a new phenomenon, this show focuses on the potential for friendships across diverse socioeconomic, racial, gender, age, and other differences, depicting a beautiful world that is waiting to happen when we all go to school together and make learning, in every manner, our objective. M-I-N-N-E-S-O-T-A Commentators remarked upon the collapse of the I-35W bridge as a fairly remarkable event. First, as Minnesota Senator Amy Klobuchar declared, "A bridge should not fall down in the middle of America." Second, despite network news anchors like Katie Couric and Matt Lauer racing to the surely traumatic and despairing disaster scene, they arrived only only to find relative calm and order. The emergency preparedness plan had been executed effectively and Minneapolis police and EMS were supported by collaboration and support offered from neighboring counties and cities. Whereas other national disasters like 9/11 and Hurricane Katrina sent bystanders running for cover, the stories that broke during the evening news in August 2007 reported that Minnesotans instead ran in to the disaster scene to help their fellow neighbors and community members. Even as the dust settled, they raced down the banks of the Mississippi to provide first aid, rescue efforts, and a reassuring hand. Steve Sack, the Minneapolis Star Tribune's editorial cartoonist, said it best: 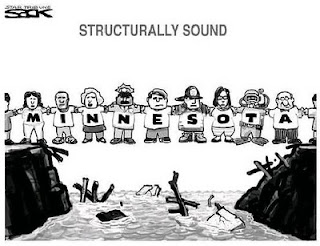 Posted by Diane Tran at 7:40 PM
Email ThisBlogThis!Share to TwitterShare to FacebookShare to Pinterest