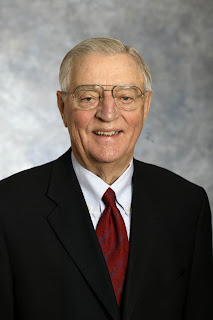 Walter Mondale
A Life in Politics

Walter Mondale is one of America’s most distinguished public servants. His years of service are captured in his political autobiography, The Good Fight: A Life in Liberal Politics, just released this month. He served the people of Minnesota as Attorney General and U.S. Senator. In 1976, he was elected Vice-President of the United States on the Democratic ticket with Jimmy Carter, and in 1993, he was appointed Ambassador to Japan by President Bill Clinton.

Free and Open to the Public

Music by pianist Thelma Hunter precedes the forum at 11:30 AM. Following the presentation, Magers & Quinn Booksellers will sell copies of The Good Fight, and Mr. Mondale will be available for signing. A public reception and a small group discussion, facilitated by the Minnesota International Center, also follow the presentation.
Posted by Diane Tran at 8:40 AM
Email ThisBlogThis!Share to TwitterShare to FacebookShare to Pinterest