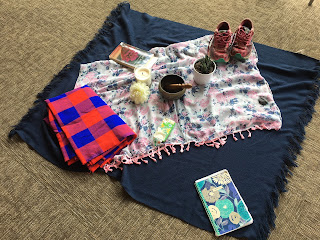 On Saturday, June 16th, 2018 we gathered at the Wilder Center for what we hope to be the first of many retreats hosted by Minnesota Rising. The intent of the retreat was something that we’ve all heard before: taking intentional time out to rest and gather ourselves in a way that fueled rejuvenation. It was a cozy group, and to me that encouraged more authentic sharing in a way that allowed us all to leave lighter. We gave away past pain, anger, and confusion to the circle in the morning as we began which created a connection that allowed us the freedom to not feel judgement or condemnation as we shared. As my retreat partners shared, I listened and turned inward—looking at the transitions that had happened in my life, were currently happening, and that I wanted to encourage for the future so that I could aptly apply the wisdom that my retreat partners shared.
As the day went on, we split into groups to allow for more intentional conversation and that is when we were able to get to the crux of what we (as a small group) most needed to have revealed to us: (1) perfection is not the goal and (2) the metaphor of the tree. We tell ourselves all the time that to err is to be human, but as we talked amongst ourselves we realized that we were holding onto the idea that the relationships and career paths that we pursued and how we behaved had to fit into the mold made for us by society (specifically the patriarchy) and that to fall short was the worst thing that we could do. We realized that we (as a group of four women) were looking to be poised and immaculate when we should be free to behave in whatever way makes us happy and that that will be perfect. Any other definition would not help us live life. It was powerful to experience this rekindling of the notion that we’re not perfect beings and we don’t need forgiveness as much as we need to accept what happened as a way of healing and moving forward with our mental and emotional states intact.
The second revelation was the tree metaphor. I’ve been hearing this metaphor since I was younger and it was a good illustration of the difference that can be found among groups of people as no one else was familiar with it. The metaphor places you in the center, as the aforementioned tree, and gives a sense of weight and time to the things connected to you. The tree is you; you are the solid trunk upon which relationships with others will be built. You have a root system that is symbolic of the connections in your life that feed your spirit and are very permanent, like family and really close friends. Next are the branches which represent strong relationships that have the potential to break off and require you to feed them – romantic relationships and new friendships can be found here. Lastly for this metaphor, you have the leaves. Leaves are the hardest part of this metaphor because they speak directly to the impermanence of life and the relationships formed. Leaves are individuals (or groups) that are only there for a season; a strong wind could send them fluttering away.
This metaphor was something that resonated with all members of my small group during our conversation and with the group as a whole during the closing circle. One of the facilitators asked how we could tell which someone was: a leaf, branch, or root and I was stumped. I had never thought about that aspect of it before, and it occurred to me that we sometimes give out information and expect that those hearing it will automatically know how to apply it to their situation. This was also a great example of something that happened frequently throughout the event: the questions of others opening up new doors to old ideas.  We decided that one way to know is to be in tune with your body and the signs that it shows you. Many times, we can see in hindsight that something was a bad idea, but we ignore the warnings and sometimes can’t hear ourselves think for the voices of others in our ears.
This is why an event like RE:treat is so necessary. A few days out from the event and the feelings of peace and connectedness that I felt to everyone who participated are still present, but more importantly I am more connected to myself and aware of the situations moving forward that will not contribute to my happiness. However, some situations cannot be avoided and RE:treat has reintroduced me to tools that will allow me to not be overwhelmed or lose touch with my intuition when I am juggling multiple things. That small step of signing up for an event that was purely about my well-being in a time of transition was the most amazing and loving gift that I have given myself in a while and I am better for it.
Posted by Minnesota Rising at 7:00 AM
Email ThisBlogThis!Share to TwitterShare to FacebookShare to Pinterest