Thanks to Nick Stuber for serving on the host team for the Minnesota Rising Fail Lab: Failing Into the Future, and for sharing his thoughts below on the May 4, 2013 event! 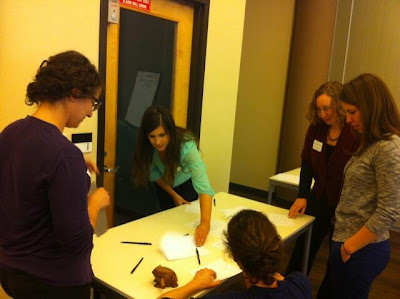 On Saturday, May 4, an intrepid group gathered to engage in the exploration and act of failing through MN Rising’s  Fail Lab: Failing into the future.  The afternoon began with an insightful presentation by Allie Moen and Maureen Ramirez in which they shared their wisdom about how to contend with and prepare for moments of failure.  Next, we collectively engaged in the act of failing through a host of fail stations, which included Jenga, writing the lyrics to a song with your less dominate hand (an act that I utterly failed at), and recalling your grade school geography lessons by filling-in blank maps of the world’s continents.  The fail stations offered us an opportunity to have fun and explore failure in low risk situations.

For me, the most rewarding and invigorating component of the Fail Lab was collectively discussing the varying dimensions and impacts of failure through World Café table conversations.  Here are some of the key points I took away that were unearthed by participants during the conversations: Failure is the often-unacknowledged process of learning that undergirds experimentation and innovation; learn to harness the unifying effect of failure; failure makes a person real, it is an integral part of being human; think about the definition of success and how it relates to the definition of failure; we need to explore how we can construct space for failure within organizations.  Finally, I want to highlight some of the ideas that people took away from participating in the Fail Lab:

Posted by Unknown at 7:00 AM
Email ThisBlogThis!Share to TwitterShare to FacebookShare to Pinterest