GOTV! And thank your election judge, too!

Today is primary election day in Minnesota. Polls close at 8PM. Have you voted yet? 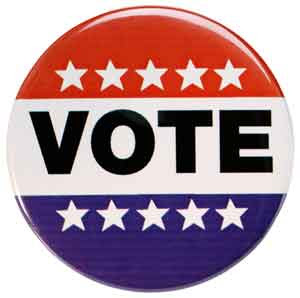 With anticipated low voter turnout, given that it is not a presidential election year, that primaries are not usually as well attended as the general elections, and that the date is so much earlier than the usual September primary dates of late, the votes of a small amount of the population today will make a big difference in the tomorrows to come. The 2010 elections will help determine the next Governor of Minnesota, lay the groundwork for contending with the critical issue of redistricting, and determine how we address the challenges our state faces with regard to the budget deficit, disparities in healthcare and education, and much, much more.

Sound like something you want to have a say in? Check out the League of Women Voters Minnesota website to read up on your primary candidates and the Secretary of State to locate your polling location. You've got until 8PM to pick up your "I voted" sticker. And don't forget to bring along a family member or friend to join in on the fun!

One last thing - Minnesota has an oft-touted, remarkably effective, and highly admired electoral system. It’s thoughtful, active citizens, like election judges, that allow us to make that claim. It’s impressive, and these volunteers and good citizens deserve kudos and thanks for their public service. And for handing us those awesome, red "I voted" stickers!

Posted by Diane Tran at 8:48 AM
Email ThisBlogThis!Share to TwitterShare to FacebookShare to Pinterest