I spent a grueling Saturday afternoon with the crew of Minnesota Idea Open Evaluators this past weekend. It was grueling not because of the company I kept or the task at hand, but rather because more than 400 ideas had been submitted across the state of Minnesota to combat the obesity epidemic we are facing. Ideas were wide-ranging; some were able to be grouped by the specific issue they were targeting - eating healthy, moving more; but mostly, they were all great examples of what community members can dream up when offered the chance to sit back and imagine.

Below, you'll see the email the MN Idea Open released announcing the 21 semi-finalist ideas now heading to the judges for further narrowing into 3 finalists. Starting May 4, 2010, all Minnesotans are invited to vote online for their favorite idea of those 3 and at the end, we'll have the winner of the Idea #1 contest of the MN Idea Open. Kudos to the Minnesotans and the Minnesota organizations involved in making the Idea Open a public space for practicing active citizenship and civic imagination! 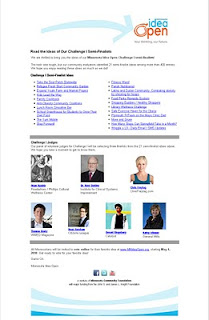 Posted by Diane Tran at 10:54 PM
Email ThisBlogThis!Share to TwitterShare to FacebookShare to Pinterest