The latest ads supporting the re-election of President Barack Obama leverage the significant public approval of his wife, Michelle, and ask if viewers will join her in voting for his second term. A supporter of the President or not, if you like the First Lady, Public Allies is offering another opportunity for you to get in good with her. The founding Executive Director of Chicago Public Allies, Michelle Obama recruited young people from housing projects and youth centers as well as colleges and universities to broaden the diversity of young people who are committed to changing the world for the better. Want to be a part of that vision? Apply now to be an Ally and support Minnesota's rise to national acclaim! 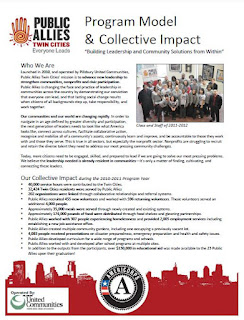 Public Allies is a program funded primarily by AmeriCorps and is the premier pipeline for developing diverse young nonprofit and community leaders. An Ally is placed at an organization and assigned to a job that will build their skills and assets, while also increasing the capacity of their placement site or expand service delivery for constituents. Allies work full-time for 10 months and participate in an ongoing dynamic training cohort dedicated to engaging nonprofit mechanics, values based leadership and social justice curriculum.

We are currently accepting Ally applications through June 6 at Apply.PublicAllies.org and Partner Organization applications throughout June. Partnership with Public Allies contributes to collective community impact, sustainability for a young workforce, building assets of our youth and leadership and celebrating the new face of nonprofit leadership in the Twin Cities!

Posted by Diane Tran at 8:00 AM
Email ThisBlogThis!Share to TwitterShare to FacebookShare to Pinterest